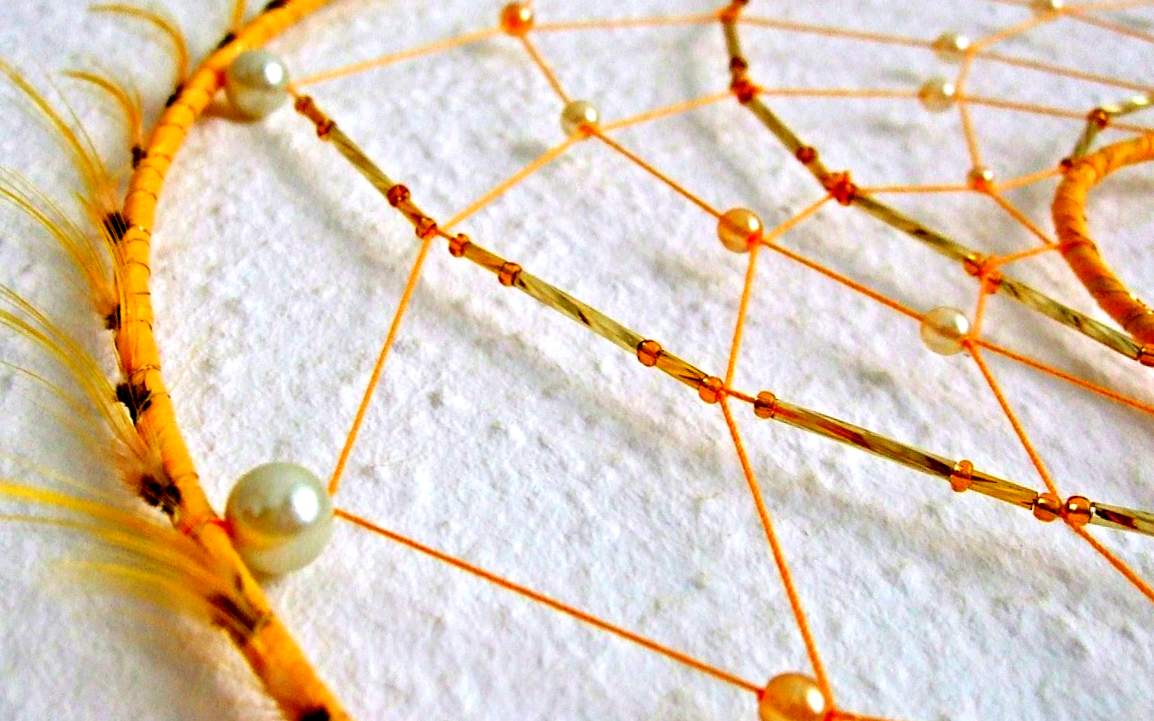 The Full Moon takes place at 25°and 53’ of the Sagittarius Sign. It strongly affects Sagittarius and Gemini Signs which are born in the third decan, as well as those having personal planets, points or their Ascendant, near the 23° – 27° degrees of the Mutable Cross.

In addition to the above this complex Full Moon brings difficulties for Cancer, Aries and Libra Signs born near the end of the second and the beginning of the third decan and is beneficial for Pisces, Taurus, and Capricorn Signs of the same days.

A full moon that’s like a shimmering spider web takes place on the night of the 17th of June.

This full moon juxtaposes inspiration and belief in our dreams with frustration and delays. On one side it fills us with a renewed belief, a sense that there is the potential for our aspirations to manifest and to be realized, while at the same time it emphasizes the toil and hardship of the everyday life and everything that holds us back.

The chart of the Full Moon is one of the most complicated of the year.

Each full moon brings to the fore a need which, depending on the extent that it has been fulfilled brings completion and satisfaction or tension and crisis.

This Full Moon takes place in the Sign of Sagittarius, with the Sun in Gemini and the Moon opposite, giving emphasis on issues that have to do with education, traveling, teaching, philosophy, writing and publishing.

Take good notice on the houses that this Full Moon activates in your personal horoscope because during the days following the full moon it is very possible that information on issues that relates to these houses may come out, helping you with valuable knowledge and revealing of higher truths.

The Moon in the chart of this lunation is in a good state, and the part of your chart ruled by the Moon, that area of life, will benefit from this Full Moon for the next two weeks.

Moon is conjunct Jupiter, leaving from a conjunction to the planet just the day before. Whatever part of your life this moon is highlighting will come to emphasis BUT cautiousness is needed not to overreact or to overthink because at the same time Jupiter is opposite Sun.

This involvement of the Jupiter in the full moon is the backbone of the chart. It gives a liberating and exhilarating sense but all the optimism has to be grounded and we have to be careful not to over-estimate our abilities.

This is exactly the catch of this Full Moon in Sagittarius. It has a duality and balances evenly between the light and the dark energy. 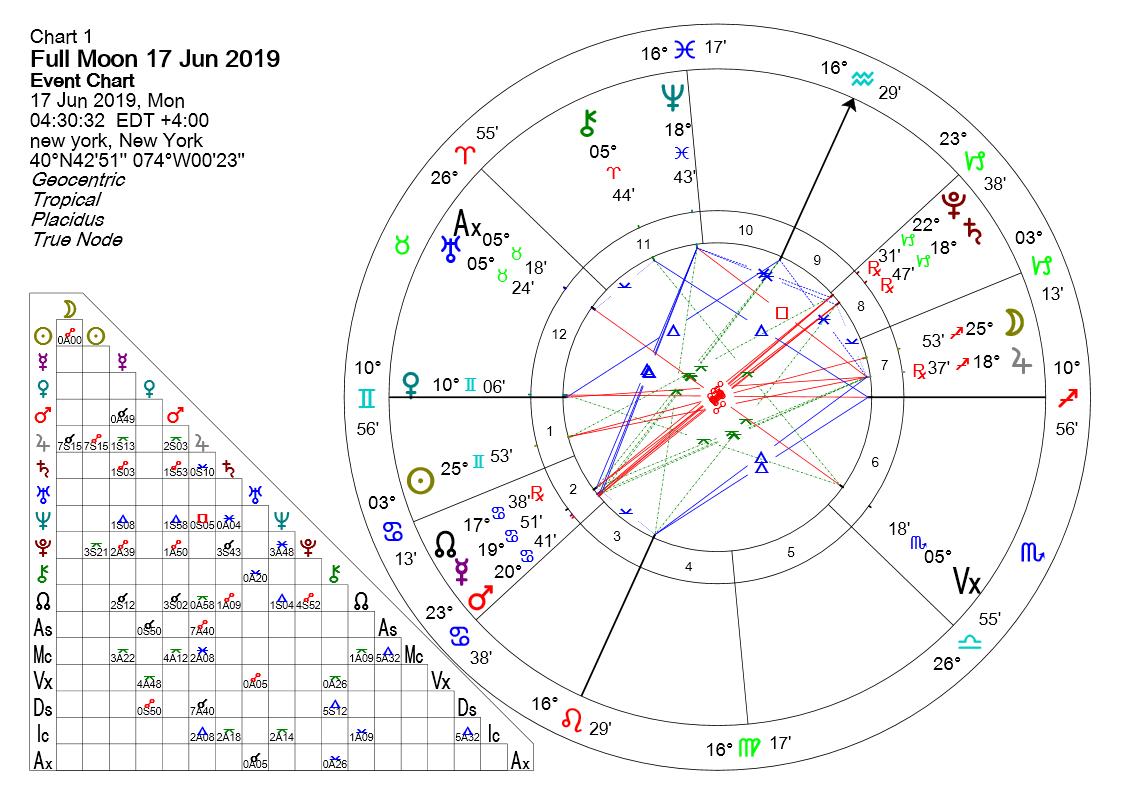 Upon the backbone of the Jupiter and Full Moon axis, two different webs are weaved.

The tangled one is the opposition between the Pluto – Saturn conjunction in Capricorn and the Mars – Mercury conjunction in Cancer. This is the dark side. It mainly affects Cancer, Aries and Libra Signs born near the end of the second and the beginning of the third decan.

The following aspects are the thick cobwebs of this side:

Mars opposition to Pluto. An aspect that may manifest in violence, physical intensity, uncontrollable passion, intense and dark sexuality, or mere fighting and shouting. If you get caught in the web of this negativity try to use your psychological power to get free and express any surge with the most constructive way possible.

Mars opposition to Saturn brings frustration and delays. We want to act and to put into action the unstoppable drive that the previous mentioned Mars opposition Pluto aspect gives, and we cannot. Obligations holds us back. The time holds us back. For some it may bring clash with figures of authority or the law. It is an aspect that requires disciplined action.

Mercury opposition to Saturn is difficulties and boundaries in us expressing us we want. Our mode of thinking is checked by someone that has authority or is a father figure. We feel the optimism of the Moon conjunct Jupiter aspect, that as we have said is core in this Full Moon in Sagittarius, we are over the top with excitement (Sun opposition Jupiter), but certain persons or the circumstances appear to declare that “Υou cannot”, filling us with pessimism. Lighten up your thinking with faith in your abilities (Mercury is also trine to Neptune in Pisces).

Mercury opposition to Pluto is the fixation of the mind. The obsessive compulsion that we feel to do it in our own way and get it done as we think it should be done, that unfortunately clashes with the delays and the frustration described in the other aspects.

Thick is the web as it seems…. 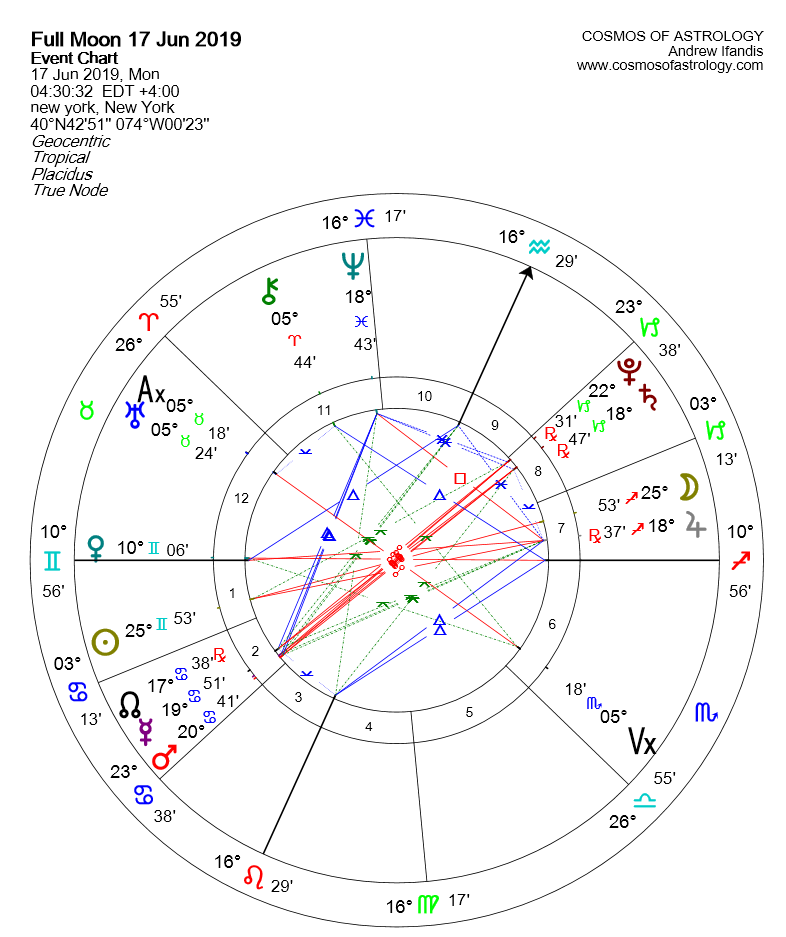 But on this complex chart all of the above aspects are aided by the Wedge formation that the planets make with Neptune on 18°43 Pisces. Neptune is the dream itself, the enlightenment and the inspiration. It is the lucid dream that contrasts the nightmare and is mainly felt by Pisces, Taurus, and Capricorn Signs born near the end of the second and the beginning of the third decan.

Mercury trine Neptune eases the mind from the compulsion described before as long as we have faith. It is in simple words an aspect that says that it’s the right time to think on our dreams and get inspired by them.

Neptune trine Mars is creativity, inspired action, charm, motivation and spirituality. It is courageous spirit towards a higher goal and the sense of fulfillment when one is in tune with the universe.

Neptune sextile Saturn helps with the grounding of the energy described above. Once inspired and having set our creativity towards the chosen goal, the aspect gives us the patience and the ability to be realistic about the circumstances and the opportunities that will be presented.

Neptune sextile Pluto is the very subtle psychic ability to tap into the dream world. A generational aspect that is mainly associated with the New Age or the modern Spirituality, which in this chart plays the role of the intuitive call towards what our soul desires.

… These are the delicate webs, shimmering and beautifully lit.

And last, one final thread the Jupiter square Neptune aspect, that holds the dream as it is, checking it, calling us to pay attention because great expectations may  bring great disillusions.

THIS FULL MOON IN SAGITTARIUS IS LIKE A DREAM CATCHER IN REVERSE.

A Dream Catcher has a woven net or web that catches the bad dreams in its intricate design, and protects us. This full moon catches our dreams in an intricate web of difficulties that appear along our way, and delay their manifestation, but at the same time holds them in check so as to release them when the time is ready.

When the time is ready because you yourselves will be ready.

“Everything can happen, everything is possible and probable. Time and space do not exist. Upon an intricate web of reality, our fantasy spins and weaves new patterns” – August Strindberg