This eclipse is especially important for those who belong to the Signs of the Fixed Cross (Leo, Aquarius, Taurus, and Scorpio) and who are born between August 9 – 13, November 9 – 13, February 5 – 9 and May 7 – 11.  Also to those having personal planets or their Ascendant near the 16° – 20° degrees of these Signs.

This eclipse functions as the aftermath of the highly dynamic period that preceded it. In a sense, it is a new beginning that follows after the realizations and the emotional peaks that we have experienced under the influence of the previous eclipses. Two powerful eclipses that have raised the volume both on personal and mundane level.

The first eclipse challenged our sense of security (Solar Eclipse in Cancer) and made us aware of power plays and pressures at home or in relationships.

The second eclipse, in its mundane expression, has resulted in unpredictable collective drama (Mars retrograde square Uranus and conjunct the South Node in Aquarius). With Mars, the planet of fire, dominant in this second and most difficult eclipse, we have unfortunately witnessed a July that was marked by wild forest fires, high temperatures that made new records and deadly heatwaves, across the globe.

On a personal level, for many of us this second eclipse was realizations made and most possibly emotional outbursts that we were not able to control.

Now with this third eclipse, that is a New Moon, we will be pushed to make a re-start.

On the personal level we can work relationships with magnanimity and courtesy and bring about closure of past issues or crises which manifested under the influence of the previous Solar Eclipse.

On a mundane level, recent events make it all the more obvious that strong leadership qualities (Leo) and innovative coaching (Uranus ruling Aquarius) is needed in all forms of social and political interactions (Mars in Aquarius). Decisions and solutions are paramount. The times seem to be critical and the repercussions of this summer will be felt in the coming years.

However, both our personal adjustment as well as the integration of the eclipse’s energy into the social collective is a slow process.

The major aspect of the eclipse is the square of  the retrograde Mercury in Leo to planet Jupiter in Scorpio. This is an aspect that may express with exaggerations in communication, misjudgments and information overload.

On a personal level we have to be aware not to be obsessed or over passionate in debates and talks, to stay focused and to avoid misunderstandings.

On a mundane level it is a period that can lead to risky or misinformed decisions in senior ranks and to high volatility in stock exchanges. 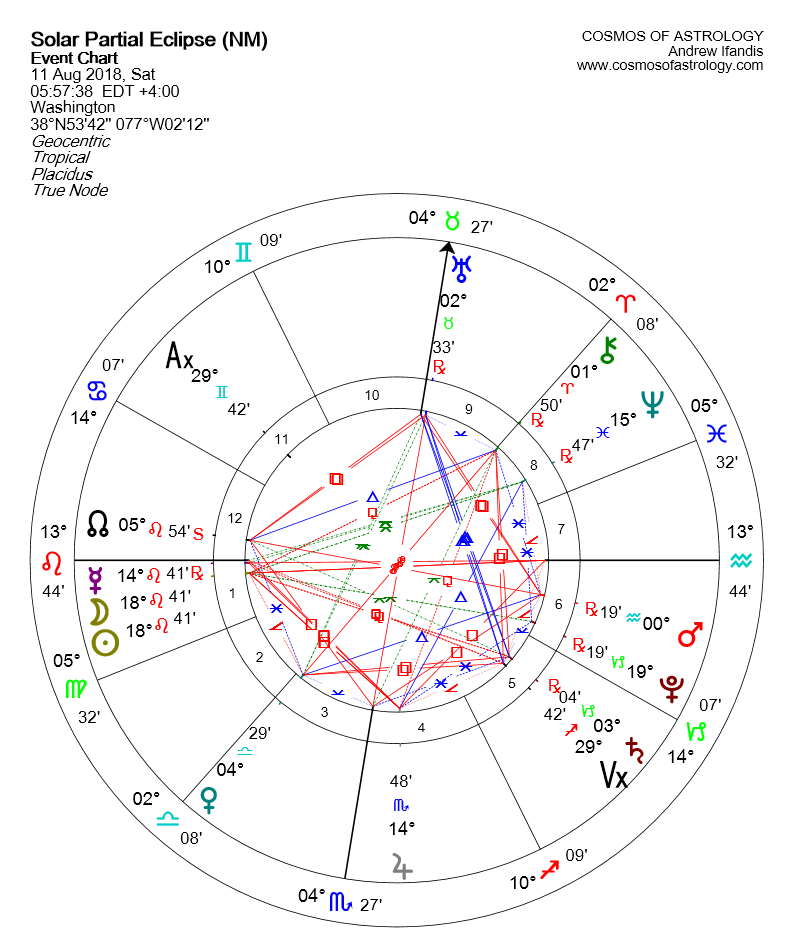 The retrograde planets are dancing

Uranus has turned retrograde just four days prior to the eclipse and will continue to move backwards in apparent motion as seen from the Earth until January the 6th 2019 when it will reach 28° of Aries.

This is something very important because Uranus becomes the sixth consecutive planet that turns retrograde adding to the retro feeling of this summer.

The process of creating something out of this eclipses’ energy is slow.

Something new will come to be ONLY AFTER we have done our work with each and every one of the retrograde planets.

ONLY AFTER we have redefined where we stand.

With Uranus retrograde we have to look at things from a fresh perspective and re-define our personal truths. To embrace the new we have first to understand what holds us back whether this be a person, a job or ideas that no longer serve us.

Uranus retrograde process to shape our personal truth works very well with Neptune being retrograde also, because Neptune retrograde helps us to see with clarity and without idealizations. BUT in order to do so we have to first get rid of our personal delusions.

Saturn is also retrograde and we need to redefine our limits and to learn well the evolutionary or karmic lessons that it poses.

Pluto continues to be retrograde and the excavation of our soul is well underway. Pluto’s retrograde period is usually felt as a psychological process that seeks regeneration, purification and results in a healthy urge for survival.

Mars is retrograde and in a high energy state being out-of-bounds during all the eclipses, with his out-of-bounds movement peaking between 14th August and 19th of August, when Mars will reach an astounding declination of 26°29’ South of the ecliptic. Delays and frustration, anger management and redefining of actions is needed.

Mercury is retrograde since the previous eclipse in Aquarius and is also a key player in this eclipse since it is conjunct the two lights. How to form our personal truth and understand our best course of action when Mercury complicates things?

How will to reach to conclusions and make decisions or find solutions within this slow-moving bog of retrograde energy?

Uranus links this eclipse to the next one!

It is then, that this cycle of awakening will come to fruition with ideas, insights, liberating energy and manifestation of truth.

Additionally important to the fact that Uranus turns direct on the same day with the next eclipse, is the fact that the planet will once more tightly square the Nodal Axis of both of the winter eclipses .

It is as if these summer eclipses prepare us. They give us lessons and demand us to work with the retrograde planets so as we can be ready for the real changes (Uranus) that are about to come.

That is why this Solar Eclipse in Leo is pivotal.

Because it plays out as the last dress rehearsal with all of us the actors absorbing the script to its last detail prior to coming forth on the scene.

A trine aspect reaches its precision with this eclipse

Saturn in Capricorn, has been in an applying trine to Uranus in Taurus throughout the last weeks, and this aspect, with its liberating and grounding energy, comes to a precision of 0° 31’ in this last eclipse of the summer period.

This is the most helpful of all the aspects, since it allows us to manage the changes and the sudden events that resulted from the eclipses, in a responsible manner.

It gives a relative stability within the slow and demanding landscape.

A second trine aspect reaches its precision with this eclipse

Jupiter in Scorpio is trine to Neptune in Pisces, an aspect that gradually comes to a very close precision with this last eclipse, culminating on August the 19th.

This is a most benevolent aspect. A divide gift of hope and compassion. It is an aspect that can work as a “Deus ex Machina”, saving us at the last moment, granting hope, bringing gifts, spiritual awareness and increased Faith.

This is the last eclipse of this long, hot summer and demands introspective work and re-evaluation to all areas pertaining to the retrograde planets.

Its energy is pivotal and has repercussions.

In the short-term, the Solar Eclipse in Leo of the 11th of August is slowly but firmly pushing us out of the bog and slowly builds on hope and a positive vision.

More importantly, it is a critical eclipse. It has a long-term effect and it prepares and grounds us for the shifting changes of the winter eclipses that hold a Uranian promise.

I wish you all ,to enjoy the last days of the summer drenched in Sun,

and the best to come,  from the marvelous Jupiter trine Neptune aspect.