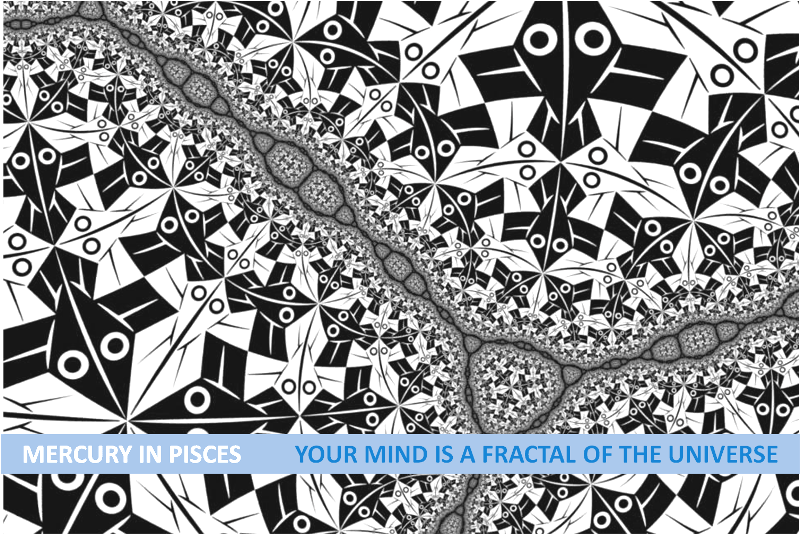 Mercury in Pisces becomes a planet that expresses with the Sign’s intuition, empathy and sensitivity. Thinking and reasoning is less analytical and detached and becomes more subjective (feminine polarity) and abstract (less rational – water element)

The mind has the ability to see both sides of a situation –this duality is in the symbol of the two Pisces, being receptive (feminine polarity and water) and easily tuned with the ambient environment or the other’s viewpoint (symbol and mutable water). Views may be easily adopted (water element) without critical process due to the impressionable nature of the Sign. On the other hand this “walking in other’s shoes” ability (mutable quality) gives emotional Intelligence to the Piscean mode of thought and makes the individual easily trusted by (Jupiter tone) and inspiring to others (Neptune tone).

Imagination (Neptune and water) flourishes when Mercury is in Pisces. The mind converts emotions to ideals, words to pictures, feelings to words and synthesizes artistically (Mercury operating in a mutable environment). There isn’t a logical conversion process. Pisces just knows without necessarily knowing how it knows.

A proneness to excessive day-dreaming (Neptune and water) or deceiving others through elaborate lies (Unskilled Mercury and Neptune) or oneself with delusions (Neptune) may also exist if the planet is unskillfully expressed.

EXPRESSIONS OF MERCURY IN PISCES

All these are the expressions of Mercury when the planet resides in the Sign of Pisces.

Mercury may be in its fall in Pisces but this fall is not necessarily a bad thing.Mercury in Pisces is in a place where the “Mind” becomes “Nous” and is connected with the Universal Mind. Cognition and logical functions operate in a different level.  Mercury is not exchanging information it just absorbs the information vibes without categorizing.

All of the information exists within the smallest tiny part of the Universe. Instead of finding it we simply need to FEEL IT.

With Mercury in Pisces your mind is a fractal of the Universe.