Robert Downey Junior (RDj) was born on April the 4th 1965 at 1:10 pm in New York, the Sun high in the sky casting eastward shadows on the boulevards. The Iron Man has his Sun, Saturn and Jupiter all well placed in the diurnal part of the chart while this action hero’s Mars is placed in the Nocturnal part and becomes formidable. 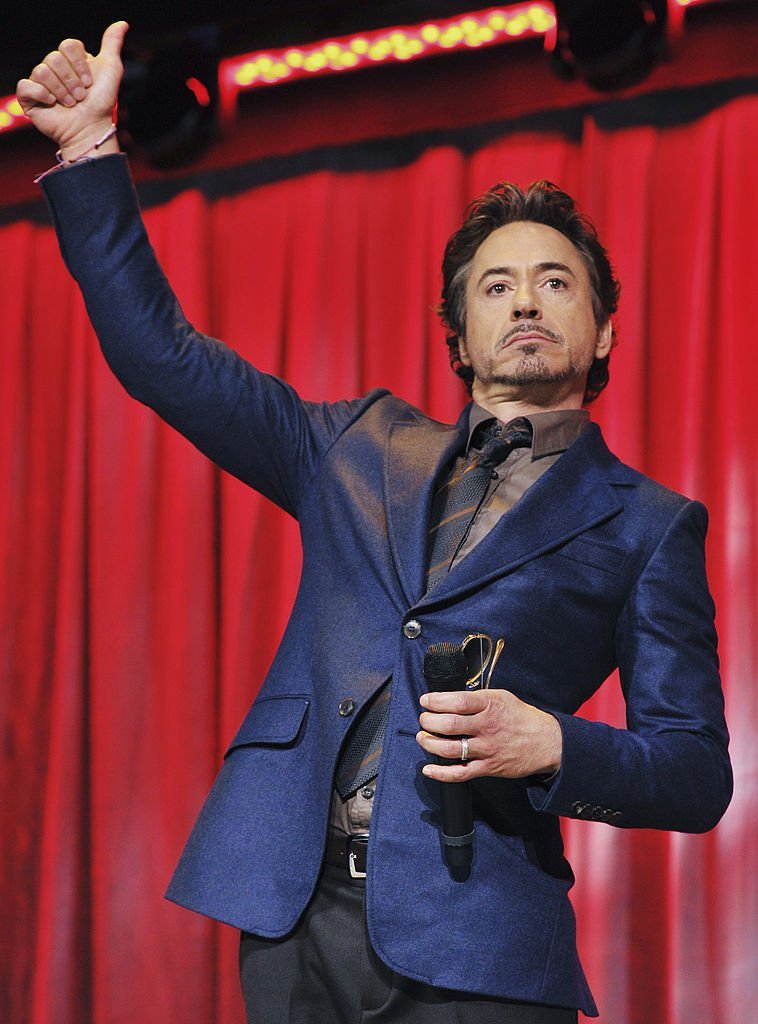 A total of four planets in the third quadrant shows that interaction with others and a need of approval characterises him, something typical in charts of artists and especially actors.

The chart pattern is a see-saw, hinting to a personality that has contradictions, sways from one extreme to another and of someone that is capable of making extraordinary achievements or to go for complete waste and misuse of its energies. A solution for this would be the person to find balance and integrate the two parts of the chart, as a means to channel the opposing energies constructively and live the chart’s potential with more completeness. RDj’s fall from stardom due to substance abuse, and his marvellous comeback, now being one of the highest paid actors in Hollywood, is characteristic of this pattern.

Robert is having five planets in Earth element and four planets in Mutable quality making his chart resonate with Virgo Energy. This energy clearly shows that he can be meticulous and punctual in whatever he does -especially with Mars placed in Virgo he is really a perfectionist actor, but this energy also shows that through his life he has to learn the lesson of Humility and of Service. And indeed through service he learned, having been convicted with drug charges and spent time in rehabilitation centers, «earning eight cents an hour scrubbing pizza pans in the kitchen of the LA County jail».[1]

With his Sun in Aries and in the 9th house he has a dynamic and passionate personality full of zeal, able to take charge, ready to jump into whatever is new, seeking the thrill of adventure, seeking risk and mind broadening experiences.  Sun is exalted, ruled by Mars. But not just any Mars. A Mars in conjunction with Uranus, the ultimate urge to act individually, break the rules and I don’t care aspect of the rebel and the anarchist.  One of his most famous quotes is:”Listen, Smile, Agree and then Do Whatever you Were Gonna Do Anyway”.

It is not without reason that RDJ is regarded to be a member of the “Brat pack”[2] and doesn’t this all sound familiar when he was arrested driving naked in a car in Sunset Boulevard under drug influence? 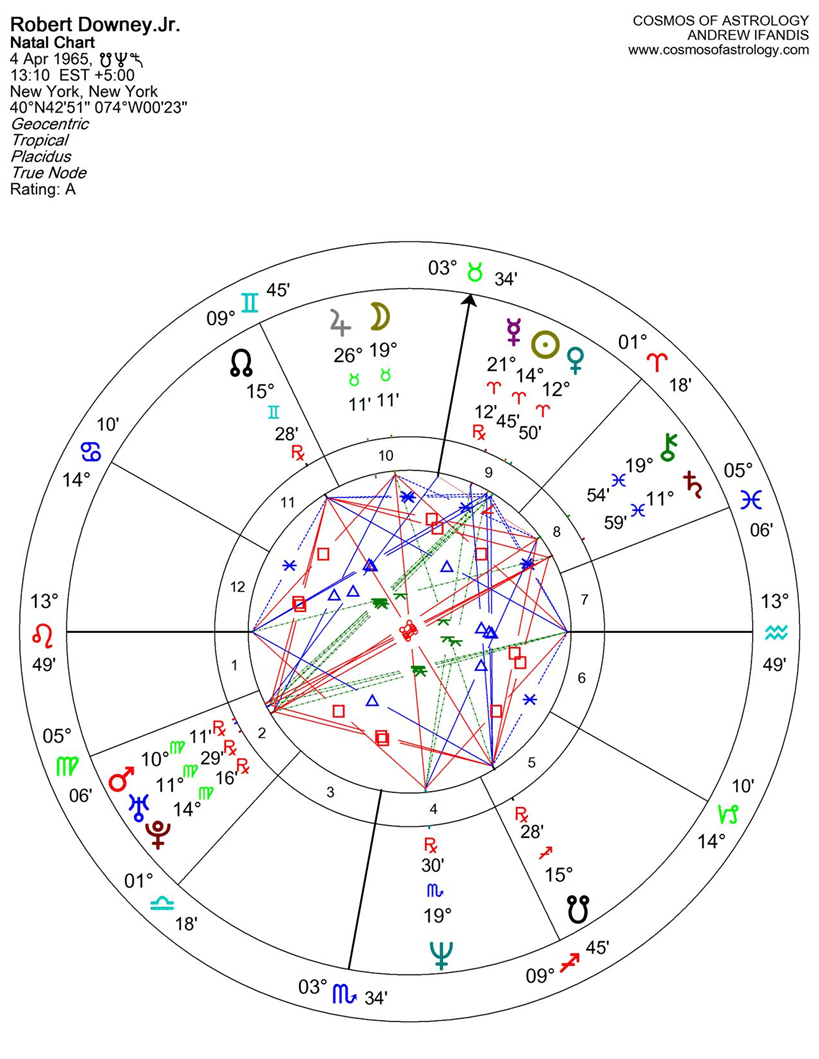 His Moon in Taurus gives emotional stamina and in the 10th house of career shows that he can really be persistent and work hard to achieve emotional security from his profession. He loves material possessions and to collect, having among other, eleven cars![3]

His ascendant in Leo gives him a warm and leading personality that is expressed creatively and dramatically, channeling the Neptune (acting, cinema) opposition Moon (sentiment) energy in his appearance, persona and roles through two square aspects.

This sensual, exalted (in Taurus), public (in the diurnal part) Moon, infused with Neptune’s sensitivity and imagination comes forth with passion in his acting (ASC in Leo). It has been written of his acting style:

«Sensitive! Downey possesses an ability to pour forth immense feeling into even minor scenes. He wears his soul on his sleeve.»[4]

This moon is strong. But every rose has its thorn as the saying goes. You cannot have a talent without a flaw...

This sensitive Moon, in partile opposition with Neptune, makes it for RDj to sometimes have difficulty to understand his own feelings or it may give him a desire for escaping to other worlds since his emotional heart needs a constant feed of «inspiration».

It’s a Moon that clings and holds on (Taurus) to whatever it feels has emotional value and in this case the Neptunian energy values escapism with taboo manners (Neptune ruling the 8th house of taboos and associated with drugs), with the emotional influences coming from the family, (Neptune in the 4th house, the father), and are deeply psychological ones, (in Scorpio).

«The star reportedly had his first experience of drugs when he was only six years old after his father, let him try a cannabis joint. The actor claims he started taking drugs with his father as an emotional bonding experience.»[5]

RDj’s moon is clinging (Taurus) to the fatherly figure. It’s an addiction that stems both from the Taurus Moon’s need for emotional security and holding on to, and from the total lack of air element in RDj’s chart that makes him unable to detach and observe objectively. 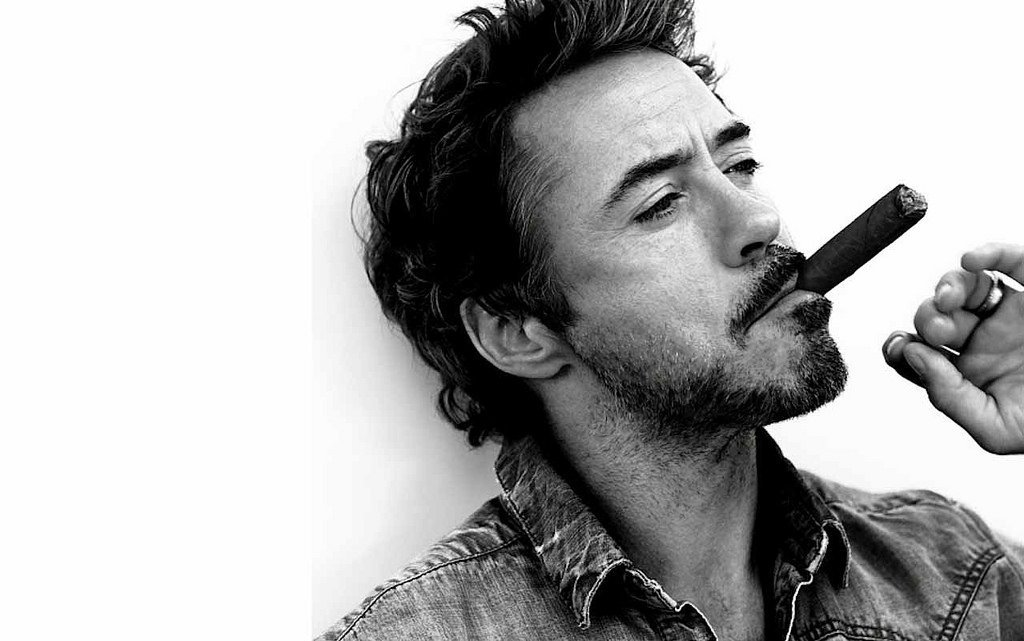 Saturn, the strict Judge, the Law, is in opposition with his rebellious actions (Mars) and brings difficulties in income (2nd house) and money granted from others (8th house), and also to the 7th (spouse) and 6th (work) houses that it rules. When RDj had his drug problems all jobs and contracts were lost and he divorced with his wife at that same period of time.

Saturn is also squaring both his nodes showing that life lessons are to be learnt associated with responsibility, confinement, the law and melancholy. Saturn in the end always brings maturity and eventually for Robert Downey Junior, Saturn here in the 8th house and in Pisces, is a planet that brought wisdom, by confining Pisces escapism and balancing Mars misdemeanours through serving (Virgo) and building of trust (8th house). It was a former lawyer, present Governor that officially pardoned Mr. RDj after he proved he’s back in the right track, an event greatly symbolic of Saturn (Governor – Authority) in Pisces (to forgive)!

His present wife, with whom he is married for 11 years, remains all this time a major and constant positive influence in his life. RDj’s Venus is detriment in Aries and may very probably was coming out aggressively or egotistically in his previous relations, but the maturation (Saturn) and subjugation of Mars energies finally freed this Venus and let romance flourish in his very loyal and reliable soul (Moon in Taurus). 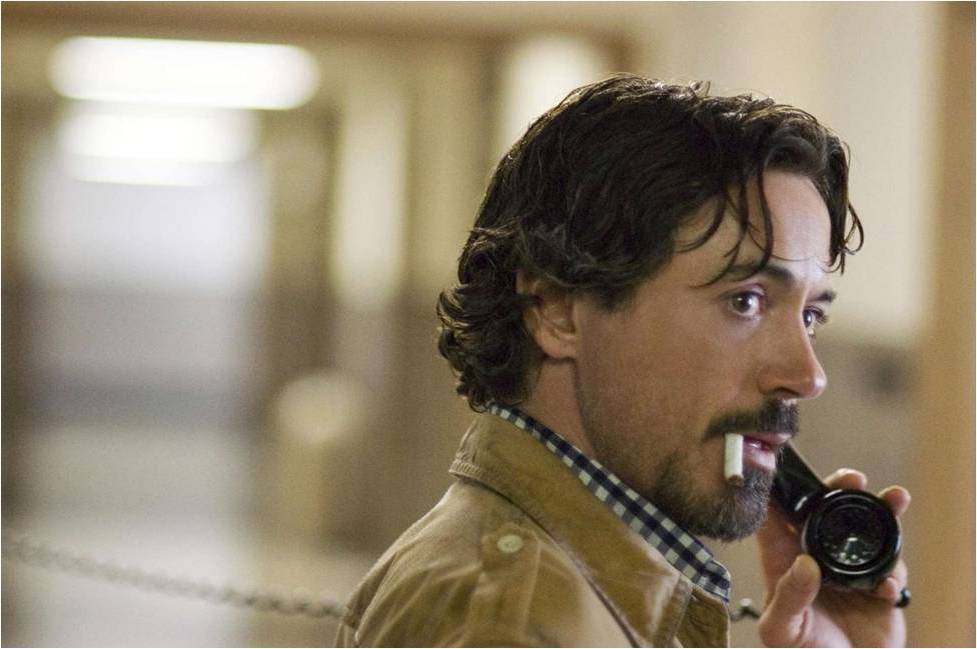 His Mars in mutual reception with Mercury makes him to be as strong or as weak as he himself allows his perception of the world to be. Either the two planets both work with adolescent brat escapism riding o
n the thrill of the chase or they co-operate and make him the very clever guy he is and throw all of their energies into more productive and money making activities (2nd & 9th House).

I would like to close this article with a small ethical didagma (moral). His Jupiter is in the 10th house and in Taurus conjunct
with his Moon. This Jupiter there gives tremendous success to career, material possessions and emotional security.

So, was Mr Sherlock Holmes, Mr Iron Man, Mr Brat a lucky guy that had Jupiter in the end getting him out of the mess and giving him stardom and money?

No! Robert Downey Junior is an excellent actor and most of all a clever guy who worked his contradictions, matured his Jovian excesses, and finally became a living example of what it means to have a see saw chart, with Jupiter in such a great position on your soul and Saturn being a curse and a gift.

He is an Iron Man with a sensitive heart and if we, as individuals, use astrological consultation to learn more of ourselves and of how we could integrate our conflicting sides, we can then embrace our contradictions, follow on his example and be cleverer and wiser.

Andrew Ifandis approaches the horoscope as a portrait of a person’s inherent potential. A reading can reveal your natal chart’s dynamics, prepare you for the future and can constructively help you towards awareness, self-realization and externalization of the creative within yourself.

Enjoy this article? Take a moment to support Cosmos of Astrology. [wpedon id=3178]