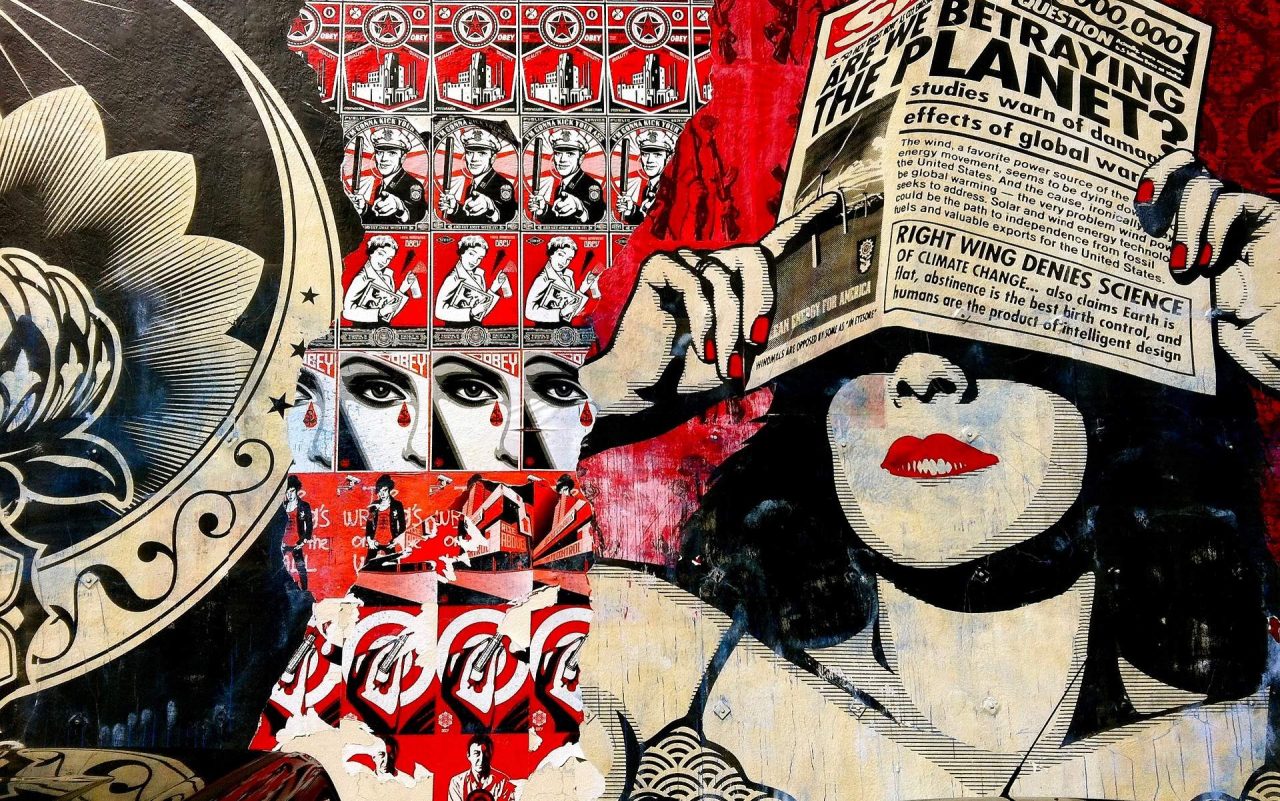 This particular eclipse is especially important for those who belong to the Signs of the Cardinal Cross (Cancer and Capricorn mainly, as well as Aries, and Libra) and who are born between January 3 – 9, July 4 – 11, April 2 – 8 and October 6 – 12.  Also to those having personal planets or their Ascendant near the 12° – 18° degrees of these Signs.

COSMOS OF ASTROLOGY MOVED TO AN UPGRADED HOSTING PACKAGE

Cosmos of Astrology site has been upgraded and is now giving you quality astrology combined with speed!

Dear readers, this is costly, therefore Cosmos needs your help to continue to provide for you, not only the best content, but also a smooth and fast reading experience. Not there yet.

Please make a donation to actively support and show your appreciation! Thank you.

The partial Solar Eclipse on January the 5th or 6th, depending on your place in the globe, is the first of five in total, eclipses, three solar and two lunar, which will occur in 2019.

This eclipse is also part of the series of eclipses on the Cancer – Capricorn axis. These eclipses began with the Solar Eclipse in Cancer on July 13 2018, and shall continue throughout 2019, up until the summer of 2020, when they will be completed.

This cycle of eclipses in the Cancer – Capricorn axis coincides with the gradual approach of Saturn towards Pluto and their conjunction in Capricorn in January 2020, thus signaling a period of 18 months that will bring significant changes to Capricorn and Cancer Signs, and also to Aries and Libra Signs, since for them, the effect of the eclipses is stronger.

Remember though, that eclipses are strong Astrological events and affect us all, some less and some more, without exception, and depending on what aspects they make on our personal natal chart.

The solar eclipse of January the 5th / 6th takes place at 15 ° 25′ of the zodiac Sign of Capricorn and is a “multidimensional” and complex eclipse with a variety of expressions, at cosmic and individual level.

Cosmic Level – A photo of the next six months

The Sun-Moon conjunction in the Capricorn Sign gives at a cosmic level a semester marked by significant changes in matters of how power is managed and administered world-wide.

The two Lights are in conjunction to Saturn and Pluto and also lie on the midpoint of the two planets. Saturn and Pluto is a combination capable of enhancing the ambitions, goals, and the control that exert, various governmental, corporate, or other hierarchical structures.

Saturn also forms a sextile aspect to with Neptune, an aspect that helps such designs and power visions to be realized, and be at the same time accompanied by a series of necessary reality checks, before they are put into effect.

At the same time, however, on the chart of this eclipse, and throughout the year, the square of Jupiter and Neptune is an aspect that undermines these plans, since it speaks of a social disappointment that will be diffused.

A disappointment that stems from the fact that people’s common sense of just (Jupiter in Sagittarius), and a yet unspecified but full of dynamism (square aspect) social vision (Neptune in Pisces), are not represented within the corridors of power.

Jupiter – Neptune in a square of extreme idealism and disillusion, which combined with the great influence that the planet Uranus plays in the general planetary setting, may bring massive mobilizations. 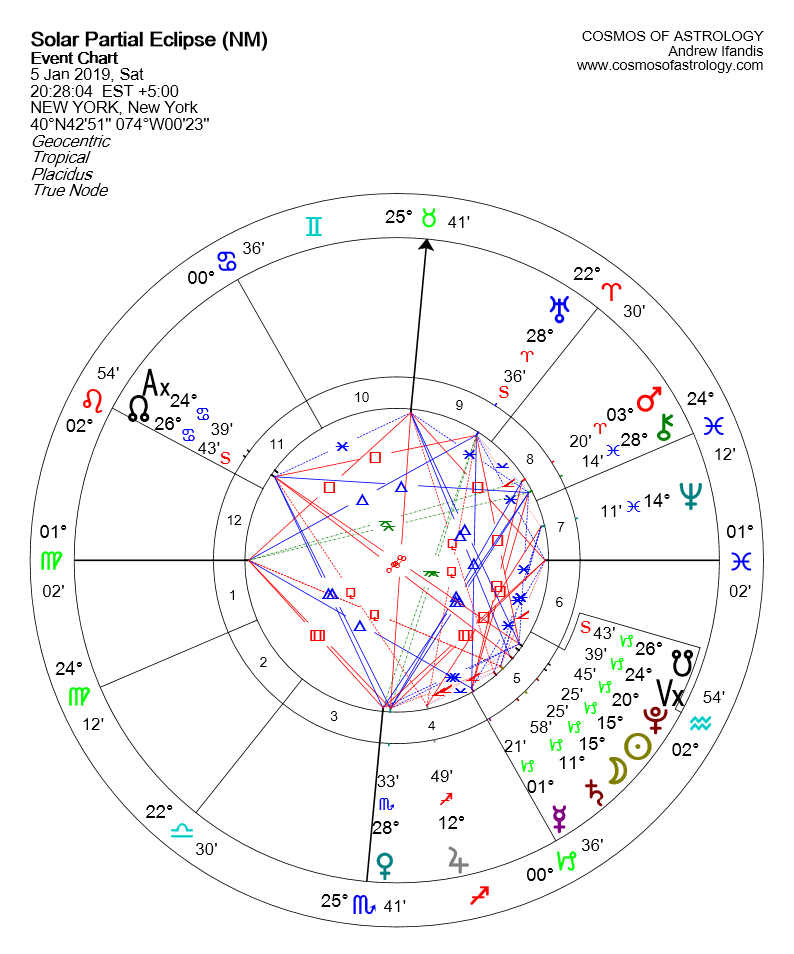 Depth of Field: Uranus and the Moon’s Nodes

The planet Uranus began to form a square to the Moon’s Nodes during the summer eclipses, an aspect that came to a precision in November 2018, and which continues in this and the next eclipse, as also in every New Moon and Full Moon up until mid-March 2019.

The continuous square of Uranus with the Moon’s Nodes brings the energy of the planet into the heart of the events for the period that follows.

Uranus was also the last planet to go retrograde in the dance of the many retrograde planets of the previous summer, and its liberating and disrupting energy will once more start to express when it returns to a direct motion.

When does this happen?

the same day with the eclipse!

All the sparkling electricity, and revolutionary or subversive action, that lay hidden, now finds an outlet, and the fact that this begins in the same day as the Partial Solar Eclipse, shows us emphatically that at the cosmic level we will see protests and upoars in the coming months.

Mercury from 1 ° 21 ‘of Capricorn is at the same time in two aspects, a harmonic and a dynamic one, which give even more evidence of how the tension will be expressed.

Mercury in trine to Uranus brings to the power holders strategic thinking and technocratic control, (preserving prestige through control of knowledge, of science and of innovation).

On a square aspect to Mars (who is powerful in the sign of his rulership) brings controversy and juxtaposition of ideas. Angry voices and action that conflicts with what the technocratic power communicates and concedes.

We see how a militant scenario is formed, as the same planet, Mercury, simultaneously stirs strategic changes for the status quo on one hand, and gives voice to protesting and defending the independence of the individual, on the other.

Two other equally important astrological elements that point to the eruptive nature of this eclipse are, the fact that the eclipse is on the Mars/Uranus midpoint and that Mars, already at 3 ° 20’ of Aries, will activate the eclipse soon, on January the 23rd.

That is shortly after the accompanying Lunar Eclipse that will take place on the 21st of the month.

Imagine, now that we have analysed the eclipse elements, how all this multidimensional dynamics hidden in the eclipse chart could be expressed in our personal horoscope, giving the tone for the events of the next half-year.

Depending on how the chart of eclipse falls on our personal horoscope and the positive or negative aspects that it forms, possible manifestations may be:

Part of the January Solar Eclipse hides pressure and eruptiveness, but at the same time hides the possibilities of empowerment, development and strengthening.

However it plays out, its effect will be possibly felt within a short time, since it will be activated soon, right after the Lunar Eclipse that is to follow.