This particular eclipse is especially important for those who belong to the Signs of the Fixed Cross (Taurus, Leo, Scorpio, and Aquarius) and who were born between April 15 – 19, August 18 – 22, November 18 – 22 and February 13 – 17. Also to those having personal planets or their Ascendant near the 25° – 29° degrees of these Signs.

The partial Solar Eclipse on February the 15th is the second eclipse to take place in 2018. It succeeds the total Lunar Eclipse that happened two weeks ago and it completes the current eclipse period that lasts until the coming summer.

It is an eclipse that takes place on the Aquarius-Leo axis, and more specifically at 27 ° 07′ degrees of the Aquarius Sign.

Eclipses are powerful astrological events and affect us all without exception, some of us more and some of us less.

A solar eclipse usually acts as a major catalyst and tends to bring about events that are definitive or irreversible. These events may have a more positive or a more negative character, depending on the Houses that the eclipse is activating on our natal chart, as well as the planets and points with which the eclipse is making an aspect.

What is certain is that the events that the eclipse brings about, are decisive events, events that are experienced quite intensely, and more importantly, events through which information is revealed to us.  Critical information, that has been elusive prior to the eclipse and that is of importance for our gradual evolution.

The partial Solar Eclipse on February the 15th can be said to belong to the class of eclipses that function positively since the majority of the aspects formed on the eclipse chart are sextiles and trines.

It is an eclipse that focuses on thoughts, ideas, and realizations.

Mercury, the planet of cognitive function, is placed in Aquarius, the Sign of intellect and dissemination of ideas. Mercury is conjunct the two Lights ready to make the recording. Uranus from Aries, in a sextile aspect with the Sun and the Moon, operates like the flash of the camera. The eclipse itself is the opening and the closing of the shutter.

and there it is, the seed, the birth of the original, the inspirational concept. Suddenly… unexpectedly… a “Eureka”,  as the one shouted by Archimedes.

It is written deep inside the core of the February Solar Eclipse to make us formulate concepts, to build aspirations and to make us wanting to share and communicate.

This very process in itself is capable and powerful enough to produce significant results within the next six months, which, among others, may relate to: 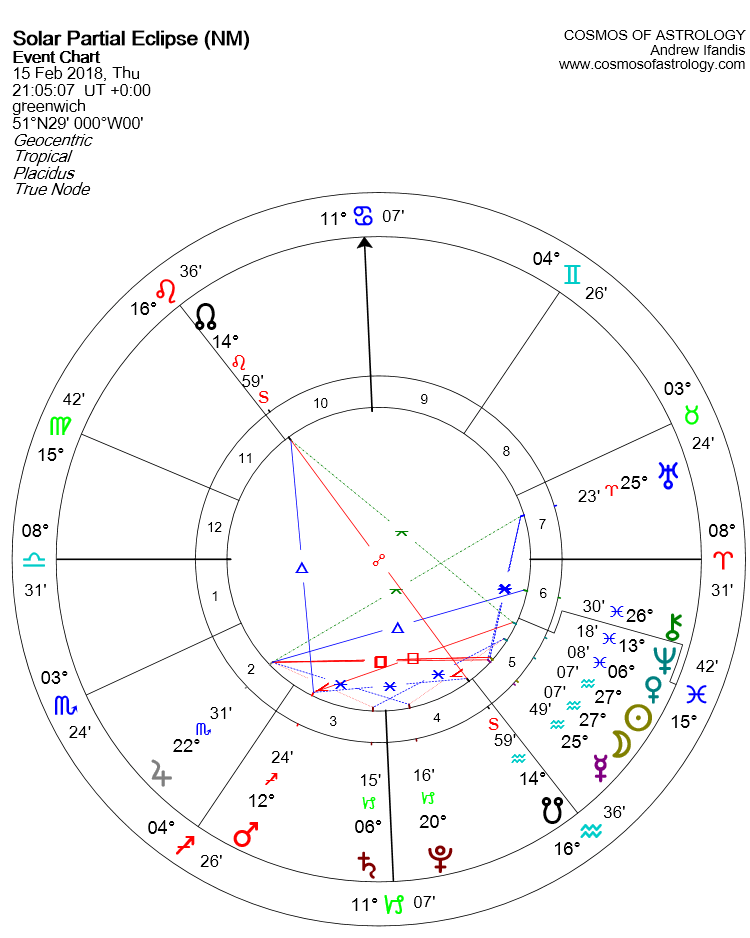 The Solar Eclipse in February, in addition to the aspects of Uranus and Mercury that we have mentioned, creates its opportunities with three more aspects.

Saturn in Capricorn in sextile to Venus in Pisces makes us devote to what we like and work with pleasure in order to achieve our dreams.

Jupiter from Scorpio in sextile to Pluto in Capricorn empowers our psychic energy reserves and makes us strong and effective in successfully pursuing our goals.

Mars from Sagittarius is simultaneously in a trine and sextile aspect to the Lunar Nodes. This is an important aspect that acts out the thematic of this Eclipse, since it helps us to act with enthusiasm, and based on our personal truth,  to move towards the path that this eclipse is paving.

This is an area where we also need to be a little cautious, due to the square aspect that Mars is making to Neptune, so that we are not get caught in the illusory shine of our own vanity.

What else needs attention?

The square that Jupiter is making to both the Eclipse (Sun conjunct Moon), and to Mercury, is an aspect that has to be managed. It is an aspect that calls us to assimilate and communicate our new ideas and perceptions, without exaggerations, while avoiding at the same time any overwhelming or grandiose plans.

The solar eclipse of February the 15th is a fertile eclipse.

In a way it continues on the events of the Solar Eclipse that we had last summer and concludes the current cycle of eclipses. A cycle that will last for six months, up until the difficult eclipses in July and August.